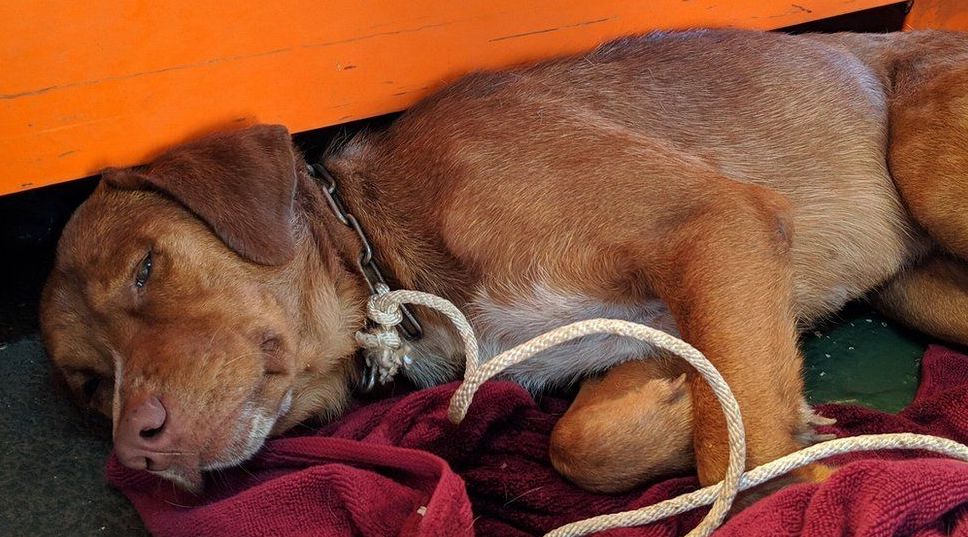 In the Gulf of Thailand this week, a brown aspin has been found 220 kilometres from shore, amazing oil rig workers who lifted him to safety at last. The term ‘aspin’ is the definition of a street dog native to the Phillipines. Although ‘Boonrod’ probably found himself in the water after falling from a boat, it is believed he had a mammoth swim before making his way to safety for a breather.

Oil rig workers named him ‘Boonrod’ because it has a connotation of luck in Thai, an apt name for a pooch seen dog-paddling so far from land.  The dog was spotted as it swam through the ocean to the platform and may not have even been noticed if the waves were higher. He was very cold and shivered as he balanced on a metal bar at the surface.  Workers looking down devised a way to rescue him and tied a rope around Boonrod’s neck to pull him up.  They were worried that if they didn’t move fast enough, he may slip back into the water. Once lifted to safety, he didn’t move much and was hardly able to stand.

After spending the weekend on the drilling platform, Boonrod loaded onto an oil vessel and then delivered to a port in Songkhla. Once he was on shore, the lucky pooch received a warm welcome from the community and a lei of yellow flowers.  Many were keen to give him pats and neck scratches.  Boonrod was looked after by a local charity group and taken to a vet for examination. He is in good spirits, recovering well and unaware that his plight has made the news all over the globe.