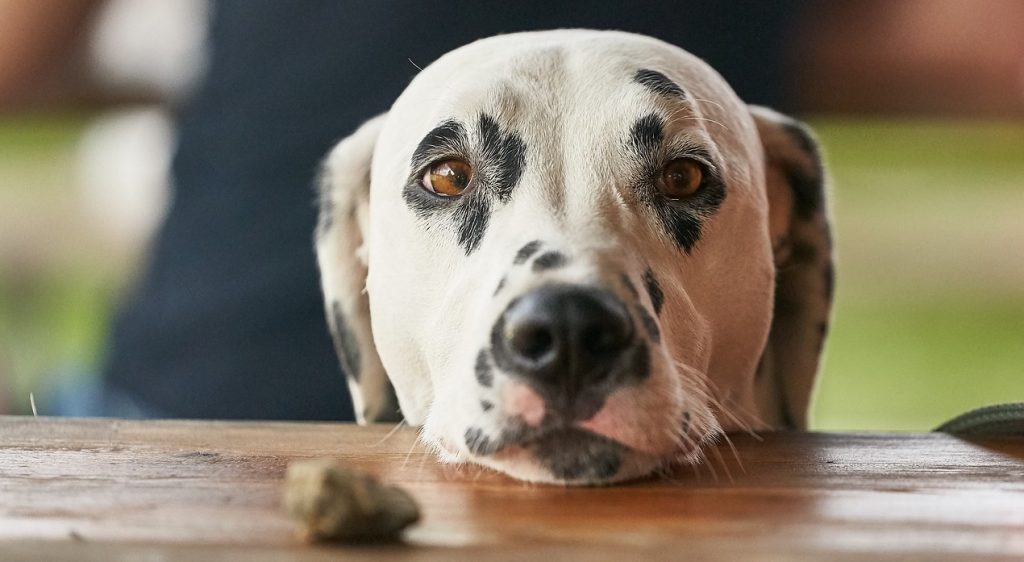 Begging –
Earlier relatives of domestic dogs lived for the most part a ‘feast or famine’ diet.  As we all recognize, food is a highly valuable commodity in the dog world.  Oh yes, in the human world too. A dog, which is well fed, may still beg whenever food is about.  A ‘food cache’ describes the behaviour where a dog places food in a stash to devour at a later time (usually buried).  In the case where sufficient volume of species-appropriate food is provided to the dog, begging is more likely a learned behaviour but can become habitual if regularly rewarded.  What gets rewarded gets repeated so if begging has become a pesky issue, let us suggest you completely ignore it. If you find this difficult, you can offer the treats at other times for alternate and desirable activities e.g. small training sessions.  Treats previously gained from begging, are now gained for performing commands and tricks, but you will still need to ignore the begging.

Jumping –
Some dogs are so enthusiastic about greeting people’s faces that they position their body upwards.  Some stand on back legs and some launch with a lot of height (face height).  You must recognise not everyone appreciates this.  Even though your dog’s enthusiasm will be met with delight from some folks, others may recoil or even deliver a knee in the chest as an attempt of self-protection which puts them and your dog at risk.  A strong negative reaction such the knee or foot would likely only happen intermittently and is therefore not an effective deterrent.  It’s not enough to say “I don’t want him to jump”. You must provide an acceptable alternative.Remember… dogs understand ‘do’ a lot clearer than ‘don’t’.

Picture the behaviour you ‘do’ want and precede. A dog who ‘never’ gets the payoff of a treat while he stares you down at the dinner table won’t continue for too long. Provide him other ways to get a tasty morsel.

If you would like a dog who sits when he is greeted by people, rewarding him for sitting makes more sense than trying to stop him jumping. If he jumps, freeze like a tree. It’s amazing that some dog parents would avoid asking people over rather than train an alternative behaviour.  Be patient and teach your dog by repetition.  If you like, you can even just wait for the right behaviour and then ‘presto’ – a fabulous reward.  It’s fantastic – the dog even thinks it was his idea because he feels like he worked it out all for himself.